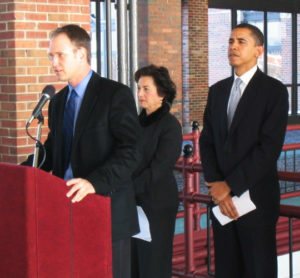 A former Obama appointee formally launched his campaign today for the Metropolitan Water Reclamation District Board of Commissioners.

Cam Davis served both terms in the Obama administration as coordinator of 11 federal departments, including the White House Council on Environmental Quality, U.S. Environmental Protection Agency, and others. He also served as the Administration’s liaison to Congress on Great Lakes matters, helping to oversee a $2.2 federal investment to clean up toxics, prevent Asian carp invasion, and other threats to the drinking water source for some 40 million people.
In an interesting twist, political critics are already calling the race difficult for anyone to win as nearly 10,000 write-ins are necessary to fill the vacancy left by the unfortunate death of Commissioner Tim Bradford.

Davis, who served as the former President & CEO of the Chicago-based Alliance for the Great Lakes before his appointment to the Obama administration, is undeterred. “I think the public is smart enough and fired up enough about Trump’s reckless assault on public health that they’ll take the time to write in a candidate’s name on a ballot to help protect their children’s future.”

The Metro Water Rec District service area covers 881 square miles, including Chicago and 128 surrounding communities in almost all of Cook County. It serves upwards of 10 million people. Its mission is to protect public health and safety related to the waterways in its service area.

Davis accompanied the announcement with the launch of an online campaign, http://www.crowdpac.com/c/camdavis.